The people are rising up. But the western celebrities and the human rights industry that fought for this are absent

In 2017, a US law firm signed a contract with the Sudanese government, to assist in efforts to lift the economic sanctions that had been suffocating the country since 1997. Within weeks, George Clooney and John Prendergast, veteran activists for human rights in Sudan, wrote a letter in Time magazine, objecting to this. They asked rhetorically, did the law firm’s senior ranks, filled with ex-senators and congressmen, not know that president Omar al-Bashir’s regime had committed mass atrocities? That it was responsible for the deaths of hundreds of thousands of civilians in Darfur? That it persecuted Christians? “The question of their firm working in the service of such a brutal and vile regime can only be answered by the simplest of terms,” they concluded. “Probably, they just don’t know.”

The sanctions were lifted, but it made little difference. The world had forgotten Sudan and was in no rush to be reminded. All that was associated with the country, ticked off neatly in the Clooney/Prendergast letter, was unsavoury. So allow me to remind you. For the past four weeks, Sudan has been seized by a popular uprising on the part of a people that has been suffering under a brutal dictatorship for 30 years, and from the effects of the global human rights machine that cut them off from the world for 20.

Now, as people rise up to remove a government that western campaigns have failed to vanquish, the moral market is closed

In late December, protests at rising inflation started, small but angry, then spread. As the momentum increased, the government’s response grew more thuggish. Intimidation of protesters turned into imprisonment and beatings, tear gas turned to live bullets. Last week, the shooting of a young doctor assisting injured protesters drew a mob outside the hospital in which he died. The crowd swelled with anger and mourning until the small hours of the morning. At his funeral the next day, instead of fear, there was more determination, as his wake turned into another protest.

Every day brings fresh tales of bloodshed and loss, videos of mothers wild with grief when their children’s bodies are brought home, and yet every day the Sudanese people leave their homes and workplaces and march into a storm of bullets and tear gas. It is no longer about inflation. For the past 30 years, corruption, ethnic division, impoverishment to the benefit of a networked few, and religious oppression have gripped the country. And death. So much death. In wars in the south, east and west of the country, in the government’s own “ghost houses” and torture cells, and in the wards of hospitals, where babies have died for want of an oxygen canister. The rising anger has burst its banks and has nowhere to flow but into the streets, deluging the government and its security forces, and seriously threatening its survival for the first time.

And yet, the Sudan human rights community that secured an international criminal court arrest warrant for Bashir on charges of war crimes, and lobbied to the last minute against the lifting of sanctions, does not seem as exercised by these developments. This is the closest the government has come to collapsing, and those who supposedly fought for this for years are missing in action.

Over the past two decades, an entire human rights industry has thrived around Sudan and its volatile government. There was no more fashionable cause. The government’s brutality was parcelled off into neat little David and Goliath narratives, each with its own infrastructure of funding, advocacy and massive media campaigns. The Christian south had to be saved from the savage, Muslim north, and so Christian lobby groups and celebrities midwifed the birth of South Sudan.

So, in Darfur, an ethnically purist Arab regime victimised African tribes. It happened in other parts of the country too, such as the Nuba mountains and Kordofan. The Arab/African binary was boosted by the government’s association with Osama bin Laden in the 90s, which landed the country with the super pariah “terror sponsor” designation. And so western governments mobilised, economic sanctions were slapped on the country, South Sudan seceded, and the human rights caravan moved on, content with having done its moral duty in ejecting the Sudanese government from polite global society. It didn’t matter that those sanctions were doing nothing but empowering Bashir and slowly choking the people.

And now, when those people finally rise up, paying with their lives to remove a government that several western campaigns have failed to vanquish, the moral market seems to be closed. There is no narrative, you see, no ethnic angle, no religious angle, no duality that an advocate can wedge themselves between and sell. It’s just a good old fashioned uprising in a dusty Saharan country where the virtue dividends for an intermediary are low. 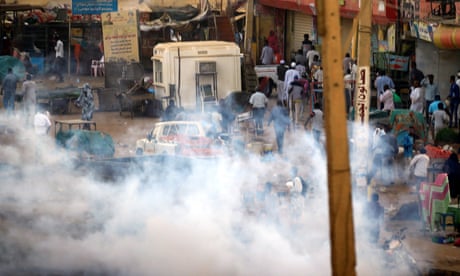 The question of their organisation making no mention of Sudan’s uprising, and the deaths of protesters at the hands of such a brutal and vile regime can only be answered by the simplest of terms. Probably, they just don’t know.

• Nesrine Malik is a Guardian columnist

European Union: Statement by the Spokesperson on the ongoing protests in Sudan

Share this on WhatsApp Bruxelles, 11/01/2019 – 12:35, UNIQUE ID: 190111_7 Statements by the Spokesperson The response by the government of Sudan to the continuing protests in various parts of the country such as the […]

Uprising in Sudan: Does this African nation offer a window of hope onto the future?

Share this on WhatsAppWhy is Western media ignoring the Sudan uprising, where citizens are resisting tyranny and Russian interference? Paul Rosenberg January 27, 2019 5:00PM (UTC) The story of the world today is the rise […]