Remember and don't forget!!!The “Darfur Genocide” refers to the current mass slaughter and rape of Darfuri men, women, and children in Western Sudan. The killings began in 2003, as the first genocide in the 21st century. Unrest and violence persist today.The genocide is being carried out by a group of government-armed and funded Arab militias known as the Janjaweed (which loosely translates to ‘devils on horseback’). The Janjaweed systematically destroy Darfurians by burning villages, looting economic resources, polluting water sources, and murdering, raping, and torturing civilians. These militias are historic rivals of the main rebel groups, the Sudanese Liberation Movement (SLM), and the Justice and Equality Movement (JEM). As of today, over 480,000 people have been killed, and over 2.8 million people are displaced.

The “Darfur Genocide” refers to the current mass slaughter and rape of Darfuri men, women, and children in Western Sudan. The killings began in 2003, as the first genocide in the 21st century.  Unrest and violence persist today.

The genocide is being carried out by a group of government-armed and funded Arab militias known as the Janjaweed (which loosely translates to ‘devils on horseback’). The Janjaweed systematically destroy Darfurians by burning villages, looting economic resources, polluting water sources, and murdering, raping, and torturing civilians. These militias are historic rivals of the main rebel groups, the Sudanese Liberation Movement (SLM), and the Justice and Equality Movement (JEM). As of today, over 480,000 people have been killed, and over 2.8 million people are displaced.

Sudan is the largest country in Africa. Located in Northeastern Africa, it borders the Red Sea and falls between Egypt, Chad, Uganda, as well as six other countries. The capitol, Khartoum, is in the Northeastern part of the country. Darfur is a region in Western Sudan that encompasses an area roughly the size of Spain. The population of Darfur is estimated at 7 million people. The conflict in Darfur has also increased tensions in neighboring Chad and the Central African Republic as hundreds of thousands of refugees stream over the two countries’ borders to escape violence.

Following independence from Britain in 1956, Sudan became embroiled in two prolonged civil wars for most of the remainder of the 20th century. These conflicts were rooted in northern economic, political, and social domination of largely non-Muslim, non-Arab, southern Sudanese. Competition for scarce resources played a large role. As nomads began to compete for grazing land, traditional reconciliation measures were no longer able to settle disputes, causing the region to become increasingly militarized. The complexities of desertification, famines, and the civil war raging between North and South Sudan contributed to a rise in regional tensions during the 1980s. Similarly, as oil was discovered in Western Sudan, the Sudanese government and international contributors became increasingly interested in the land in Darfur. 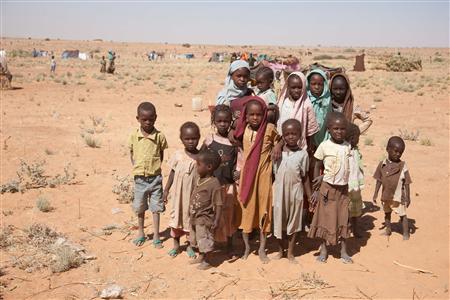 The first civil war ended in 1972 but broke out again in 1983. The second war and famine-related effects resulted in more than 4 million people being displaced and, according to rebel estimates, more than 2 million deaths over a period of two decades. As the civil war between the North and the South reached its peak in the 1990’s, the government ignored reports of rising violence in Darfur.

While the Comprehensive Peace Agreement ended the North-South War in 2005, granting additional political power to South Sudan, it failed to take into account the effects of the war on Darfur. Darfur remained underdeveloped and marginalized at the federal level, lacking infrastructure and development assistance. This neglect, combined with allegations that the government was arming Arab tribesmen (Janjaweed) to raid non-Arab villages, was cited as the justification for a February 2003 rebel attack on a Sudanese Air Force Base at El Fasher, North Darfur. This attack sparked a series of government reprisals on residents of Darfur, contributing to the large-scale human rights atrocities facing Darfurian civilians today.

Failed peace talks have allowed for the continuation of the conflict. The most successful talks thus far took place in Abuja in 2005-2006, leading to the Darfur Peace Agreement (DPA). Present at these negotiations were the Sudanese government and three main rebel groups: the Justice and Equality Movement (JEM), Abdel Wahid Mohamed al-Nur’s faction of the Sudan Liberation Movement (SLM), and Minni Minawi’s faction of the SLM. However, multiple negotiations have thus far been largely unsuccessful.

Early in 2008, the UN issued a hybrid United Nations-African Union mission (UNAMID) to maintain peace in Darfur. UNAMID, with a projected strength of 26,000 troops, was authorized to use force to protect civilians. Despite this mandate, however, only 9,000 were sent, and they lacked the necessary equipment to carry out their mission.

On March 4, 2009, the International Criminal Court issued an arrest warrant for Sudanese President Omar Bashir for crimes against humanity and, in July 2010, a warrant for arrest on charges of genocide. The government of Sudan, however, has yet to turn him over, and since the issuance of the warrants, the country has seen major protests and increased violence. The government has also forcefully expelled aid agencies from the country that has further jeopardized the conditions for thousands of displaced and marginalized civilians. It is expected that al-Bashir will not face trial at the International Criminal Court in The Hague until he is apprehended in a nation which accepts the ICC’s jurisdiction. Sudan is not a state party to the Rome Statute, the international treaty creating the ICC, which it signed but didn’t ratify. By all accounts, al-Bashir should be a prisoner in his own country. However, the Arab League has announced its solidarity with al-Bashir. Since the warrant, he has visited Qatar and Egypt. Both countries have refused to arrest him and the African Union also condemned the arrest warrant and asked the United Nations Security Council to delay its enforcement.

The Sudanese government and JEM signed a ceasefire agreement in February 2010, with a tentative agreement to pursue further peace. However, talks have been disrupted by accusations that the Sudanese army continues to launch raids and air strikes against Darfur villages.

The Janjaweed have also been accused of incursions and attacks in neighboring Chad. Hundreds of aid workers in Chad have already been evacuated due to increased tension between rebel groups and military forces. Meanwhile, the Janjaweed have ventured deep into Chad to conduct assaults, resulting in the fleeing of nearly 100,000 Chadians.

In July 2011, South Sudan gained independence and became its own nation. During the same month, the Liberation and Justice Movement, an umbrella organization representing rebel groups, and the Sudanese government signed the Doha Document for Peace in Darfur (DDPD). This document represents the process of peace in Darfur; however, little progress has been made after the document was signed because of lack of implementation and enforcement.

As 2013 began, there was violence between Abbala/Reizegat and Beni Hussein tribes over goldmines. This left thousands displaced and many dead. Conflicts between communities in Central Darfur spread to South Darfur, displacing tens of thousands of people in April 2013.

In 2014 and 2015, government forces backed by the Janjaweed led counterinsurgency campaigns in Darfur where they repeatedly attacked villages, burned and looted homes, and beat, raped, and executed villagers.

Violence continued into 2016. Amnesty International alleged the government used chemical weapons against civilians, and 190,000 people were displaced due to violence, according to the UN. Over 3 million are still heavily impacted by the conflict. Attacks on Darfuri villages commonly begin with Sudanese Air Force bombings. Air campaigns are often followed by Janjaweed militia raids. All remaining village men, women, and children are either murdered or forced to flee. Looting, burning food stocks, enslaving and raping women and children, and stealing livestock are common. Dead bodies are tossed in wells to contaminate water supplies and entire villages are burned to the ground.

The on-going conflict in Darfur, Sudan was declared “genocide” by United States Secretary of State Colin Powell on September 9, 2004, in testimony before the Senate Foreign Relations Committee. On February 18, 2006, President George W. Bush called for the number of international troops in Darfur to be doubled.

On September 17, 2006, British Prime Minister Tony Blair wrote an open letter to the members of the European Union calling for a unified response to the crisis. In supporting the United Nations Security Council Resolution in 2007 to authorize the deployment of up to 26,000 peacekeepers to try to stop the violence in Darfur, British Prime Minister Gordon Brown said in a speech before the General Assembly of the United Nations, the Darfur crisis was “the greatest humanitarian disaster the world faces today.”  The British government also endorsed the International Criminal Court’s ruling regarding Sudanese President Omar al-Bashir and has urged the Sudanese government to co-operate.

For decades, Russia and China have maintained a strong economic and politically strategic partnership. The countries opposed UN peace keeping troops in the Sudan. Russia strongly supports Sudan’s territorial integrity and opposes the creation of an independent Darfuri state. Also, Russia is Sudan’s strongest investment partner and political ally in Europe. Russia considers Sudan as an important global ally in the African continent.

Message to the United Nations, the international community, the human rights and G20

US Sanctions on Sudan: Al Bashir has killed more people than ISIS and Boko Haram did!